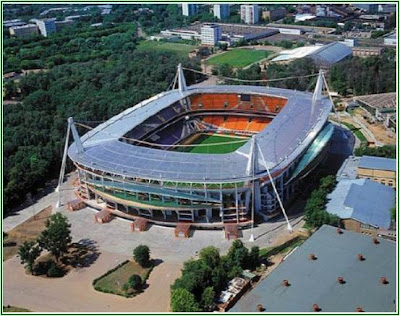 Introduction
"Russia's finest stadium", are the words used by author Marc Bennetts to introduce Lokomotiv's home to his readers in his book "Football Dynamo, Modern Russia and the People's Game". The autho 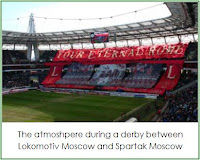 r continues by writing that Lokomotiv Stadium, "unlike many Russian grounds, has no running track, and the fans are pressed right up to the side of the pitch, making it one of the few stadiums in the country that has real atmosphere." Actually the author is right. Apart from Lokomotiv Stadium, only Saturn Stadium and recently built Arena Khimki, home to FC Saturn Moscow Oblast and FC Khimki respectavily doesn't have tracks around the pitch. The picture shows the atmosphere during the derby between Lokomotiv and Spartak. Other matches which use to generate excellent atmosphere are those versus CSKA and Zenit.
Description
The Lokomotiv Stadium, situated at Cherizkovo makes part of the Lokomotiv Sport Complex which spans an area of 25 hectares. The stadium, which holds 28,800 people, all seated, was reconstructed in 2002 and it costed the Russian Railway Ministry, Lokomotiv's sponsors, 30million dollars. Currently Lokomotiv Moscow are the sole tennants of the stadium, however, often the Russian National Team play it's home games at Cherizkovo. Obviously the stadium meet both UEFA and FIFA requirements. The pitch, which is 104mx68m, is surrounded by two-tiered four all-seater stands, the North Stand, the South Stand, the "Vostok" Stand and the West Stand. The South Stand is home to the Lokomotiv Moscow ultras. On the other hand travelling fans generally reside in the North Stand. Actually in the North Stand one can find the guest sector which holds 2345 people. Each stand has different colour seats, which helps indicate your stand if you don’t understand the Russian script on your ticket. 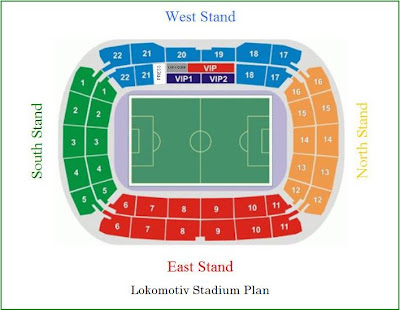 All the stands are covered by a roof, by thus protecting the fans from the Russian harsh weather elements. The total areas of the glass roof is 20,000 square metres. An unique characteristic of the stadium are the VIP-Boxes found in between the upper and lower tier 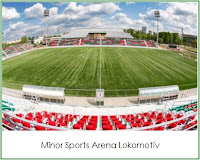 s of all the stands, with one of them being even a restaurant. Furthermore the stadium comprises of other three VIP-sectors, one of them being of soft-seats. Altogether they total to 974 VIP-seats. Furthermore there are 156 seats available for the press. Thus in all the stadium holds 30,000 people. Moreover beneath the stands one can find a fitness centre, a bowling club and also the offices of both the club and the fan club. Moreover beside the stadium one can find the Minor Sports Arena Lokomotiv which holds 5000 people. It is the home stadium of Lokomotiv-2 Moscow and the youths of Lokomotiv Moscow. 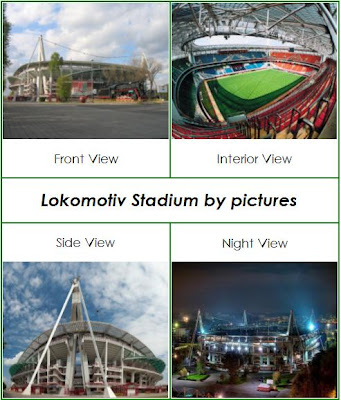 History
Stalinets
In 1935, at the site where the Lokomotiv Stadium is resided today, an electric workers union decided to

built a stadium which was named "Stalinets". At that time Stalinets was the biggest and the best stadium in Russia and it accommodated many of the Moscow teams.

Development of Lokomotiv Stadium
After holding several key matches and became the symbol of football in Moscow, Stalinets was demolished to make way for a more modern stadium. Thus Lokomotiv stadium was built. It was opened on August 17, 1966 and it had a capacity of 30,000 people. However, in mid-90's the capacity of the stadium was reduced by 6,000 to 24,000 due to the fact that the wooden benches were replaced by plastic seats. The inaugural match played at the Lokomotiv stadium was between Lokomotiv Moscow and Dynamo Kiev. As years rolled on, Lokomotiv held several important matches such as Russian National team home matches, Lokomotiv matches and others. However the pinnacle in the history of stadium was Spartak's European Cup qualifier against Swiss club FC Sion which finished 2 all. However after the match the Swiss forced UEFA to measure the posts in order to find out if they comply with international standards. Astonishingly enough size of the posts proved to be infringe international standards. Eventually, UEFA ordered a replay which was won by Spartak Moscow by 5 goals to 1.

Re-Development of Lokomotiv Stadium
Despite that Lokomotiv stadium was still of good quality in terms of infrastructure, the Lokomotiv Moscow board felt that a new stadium would be the best option for everyone. Backed by the Russian Transport Ministry, Lokomotiv built an arena, which although at first was heavily criticised and branded as a "flying saucer" by the Russian fans, today stands out as the best arena in Russia. The reconstructed Lokomotiv Stadium held its first match on July 5, 2002 when Lokomotiv welcomed Uralan. During this match Dmitry Semochko listed his name for all the wrong reasons as the own-goal he comitted was eventually recognised as the first official goal at the new Lokomotiv Stadium.

How to get to the Lokomotiv Stadium
The stadium is located in the North East quadrant of Moscow, just outside the second ring road.

How to get a ticket for the Lokomotiv Stadium
Tickets for a Lokomotiv match go on sale online via the website from ten days before a game, or can be bought from the ticket booths on the main road to the south of the stadium.

Around the Lokomotiv Stadium
The stadium is located in a mixed area, with commercial properties to the east, residential blocks in the south and woodland to the north and west. There are a few bars and cafes to the south of the stadium but these are very much home fans only. Although you can walk from the metro station to arrive at the stadium, on evening games, it is best to use the station entrance and exit to the south of the platforms as this brings you out directly onto the main road where the entrance to the stadium is.

PS - I didn't copied and pasted the article of Lokomotiv Stadium found on wikipedia over here. Actually I was the one to edit the article on wikipedia back in September - Loskomotiv
Posted by Silvio at 2:09 PM


Show your opinion and leave some comments! 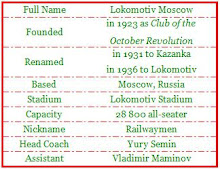 (all fees are in euros)
In:
Vladislav Ignatiev - Krylya Sovetov Samara
*signed on a free transfer from Krylya. Contract for 5 years.

Aleksandr Aliev - Dynamo Kiev
*signed for a fee thoughted to be 8mln from Dynamo Kiev. Contract for 3 years.

Maicon (Maicon Marques Bitencourt) - Fluminense
*signed for a fee thoughted to be 4mln from Fluminense. Contract for 4.5 years.

Roman Shishkin - Spartak Moscow
*signed for a fee thoughted to be 0.5mln from Spartak Moscow. Contract for 0.5 years with the option to extend for another 3 years.

Dmitry Loskov - Free Agent
*signed on a free transfer after being released by Saturn. Contract to 0.5 years.

Out:
Ivan Levenets - free agent
*left the club on a free transfer.

Artem Gomelko- Naftan Novopolotsk
*on loan till the end of the Belarussian season.

Jan Durica - Hannover 96
*on loan till summer - with an option to make the transfer permanent.

Stanislav Ivanov - Rostov
*on loan till the end of the Russian season.

Baye Djiby Fall - Molde FK
*on loan till the end of the Norwegian season.

Sergey Efimov - Dynamo Bryansk
*on loan till the end of the Russian First Division.

Aleksandr Minchenkov - Dynamo Bryansk
*on loan till the end of the Russian First Division.

Oleg Kuzmin - Rubin Kazan
*sold for a fee toughted to be around 3 million to Rubin Kazan.

Peter Osaze Odemwingie - West Bromwich Albion
*sold for a fee toughted to be around 3 million to West Brom.